Hi Silvio, thanks for taking part in this interview

How old were you when you got into Martial Arts and what was your first style?

I took up martial arts at the age of 12 and before I committed to a discipline, I did some research into the system and discipline that would suit me best and shortly after I started practicing the art of ITF Taekwon-do.

How did you get into Martial Arts and who was your inspiration?

Growing up in 1970’s, I was naturally inspired by Bruce Lee, who made a huge impact on the international silver screen. His screen presence, phenomenal physical shape and agility attracted the attention of millions of devoted fans, followers and inspired a worldwide spread of martial arts which had been somewhat obscure until this point.

I decided to find a school and enrol myself with great desire to learn to defend myself after my brother and I were brutally attacked on  a street as young boys.

Very shortly after enrolling into a Taekwon-do class in New Malden, ( London, UK ), belts started changing colour as my enthusiasm, passion and dedication intensified and grew over a short space of time.

Being highly inquisitive, I had to understand the mechanics and working of world and life around me and as such Taekwon-do appealed to me due to its scientifically sound and biomechanically effective movements.

How do you manage to balance your Weight training with your martial arts and a busy schedule filming?

Early on in my training, I identified components that make up an effective athlete. These components can be labelled as the S Factor comprising of Skill, Speed, Strength, Speed, Stamina, Suppleness and Strategy. We can clearly obtain and enhance our strength, speed, stamina and suppleness through resistance weight training therefore from the beginning of my journey, I effectively combined weight training with martial arts as did Bruce Lee who inspired me.

I make time and do things in order of priority although frequently I throw myself off balance through overtraining, overworking. My days start 5am as have for many years and I endeavour to fit in all those things that make up who I am and shape up my visions of future and my dreams.

Have you always wanted to star in films, how did it come about?

I competed in Taekwon-do International circuit very intensely for 11 years with a record of multiple International titles and had always hoped my competitive success would get me noticed and give me a spring to leap onto the silver screen. In year 2000, I signed up with an agency. Several weeks later, I flew out to Thailand to work along Scott Adkins, Tsui Hark, Rob Van Damme in a Hong Kong Production, “Black Mask 2”. Fallen in love with the entertainment industry, I returned to UK with much enthusiasm to develop myself further as an actor so I enrolled into a Drama School and set out to develop my skills further in areas to increase my chances of success.

What would you say to someone that is looking to get into Martial Arts and is unsure where to start?

We are all different as are our journeys so I would say, find something that makes you tick, challenges you, inspires you, motivates you to grow and express yourself through it. Engage and try different systems until you find the one that moves you, nurtures your mind, body and soul.

What are your top tips for building lean muscle without effecting speed for martial arts?

Biggest influence on weight training comes from bodybuilding. DO NOT do conventional Bodybuilding isolation movements which are merely designed for the aesthetics.  Focus exclusively on FUNCTIONAL TRAINING. Please subscribe to my YouTube channel Silvio Simac and follow me on Instagram #silviosimac for lots of tips and exercises on Functional training.

Most or nearly all functional training is performed standing upright in a 3 dimensional plane, engaging a sequence of movements which in addition to strengthening your muscles will strengthen your joints, tendons, ligaments and core therefore bring about greater power and efficiency to your movements, kicks, punches etc.

Do you adapt your training dependant on movie role and does this impact your diet?

Training for a movie mostly involves leaning out therefore diet is crucially important. Fist of all elimination all sugar and wheat from my diet. My training has to consistently adapt, evolve and change in order to prevent a plateau common with following same routines week after week.

I also trained many celebrities for their roles in films. People like Scott Adkins, Tom Hardy, Andi Peters, Dan Stevens, Holly Valance, Sarah Carter are a few to mention.

So far you have had a great career starring alongside some greats in the movie industry who have you enjoyed working with the most and why? 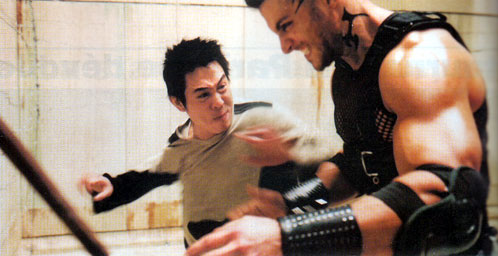 I have been extremely fortunate, lucky and grateful to have been working along some of the greats in this industry in that I have learnt so much from each one of  them as well as have been inspired and motivated further to give my best working along them. People like Scott Adkins, Jet Li, Eric Roberts, Keanu Reeves, Bob Hoskins, Thui Hark, Yuen Wo Ping ( Action Director of Matrix 1,2 and 3 and Director of Crouching Tiger Hidden Dragon ), Jason Statham and so many others. These are very focused, determined and hard working individuals and each one of them has influenced me to strive  to grow better each time.

To date I have worked with Scott Adkins on 5 Productions as well as performed many, many seminars and live event alongside. Scott is a good friend and his hunger, dedication and single mindedness’ is truly inspired me not to lose focus when presented with obstacles and challenges. Best guy I had worked with.

You have achieved so much in the fight world would you like to go back into competition?

Competition has shaped my character, given me immense dedication, focus and self belief. My competitive years have certainly planted the seed to grow and develop into a single minded, highly driven and focused person I am today.

I retired from  competing very young and at the age of 27 when my film career begun. I missed it so much and on so many occasions, I was tempted to go back to competition but in the end I decided to give my full focus on a new chapter in my life.

What is your favourite pastime when not training?

I have so many interests and pass times  hobbies and tend to juggle them as and how my time permits. I enjoy watching movies, travelling with my family and most I enjoy cooking and entertaining guests.

What people say... Leave your rating
Sort by:

Be the first to leave a review.

About the Author: login